What Kim Kardashian’s cellulite can teach kids – no, seriously

When it comes to role models for our children, it’s a pretty safe bet that few of us would choose Kim Kardashian.

But events this week have, ironically, provided a perfect opportunity to address the topic of fake-perfect images that have become the norm on social media outlets and cause a huge amount of anxiety and uncertainty in young people.

You may not be aware of the furore surrounding pictures of the reality TV celebrity on a Mexican beach – and if so, well done – but chances are that every teenager you know is aware.

The shots were so shocking that Kim lost 100,000 Instagram followers within just a few hours. What could the woman who “broke the internet” with a series of pictures that wouldn’t have been out of place in a top-shelf magazine have possibly done?

And the answer is: grow cellulite. 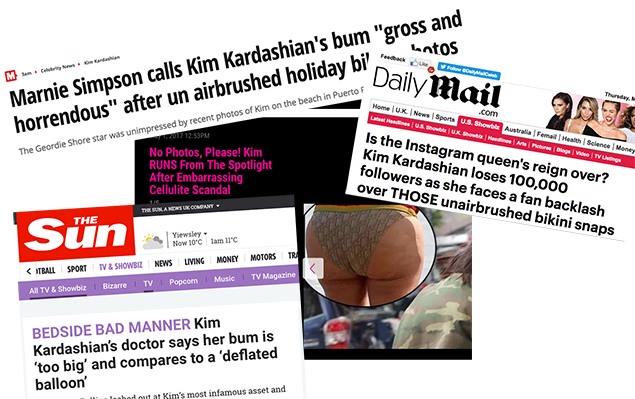 Just a few of the hundreds of articles written about Kardashian imperfect backside.

Yes, the 36-year-old socialite and mother-of-two made the fatal error of being human. The pictures – taken by paparazzi– captured her less-than-perfect behind and it instantly became an internet shamesation.

As an adult, the first response to this was likely to be sympathy, followed by anger at others for objectifying and mocking her for being human. (We’ll pretend that no other, less charitable thoughts occur to you.)

For young people however, the reaction is likely very different. While most will say that of course Kim Kardashian doesn’t have a perfect body, the truth is that seeing an imperfect picture of her is a shock.

This is a woman who has a team of people paid to make her look fabulous. And they are good at their jobs. Often to the extent that her shared pictures don’t seemed staged or manufactured. Her Instagram account appears to give everyone a behind-the-scenes view of a glamorous lifestyle.

You see photoshoots – with make-up artists at work – but just as often there are “candid” shots of her alone or with her friends and family. Some are posed, others appear to be simple selfies.

Kim, who has 99 million followers (!) on Instagram, has in many respects defined how the app is used by most of its biggest “stars” and hence what an enormous number of young people, especially girls, try to emulate.

But of course, it is all carefully manufactured, with every detail obsessed about, and professional touch-up artists carefully removing blemishes and any unsavoury looking folds, wrinkles or bulges.

The sheer number of perfect pictures of Kim does make you start to believe that maybe she is supernaturally smooth. But then her most famous asset is splashed over the internet and the carefully constructed fantasy is broken.

Body image is a critical concept for children to understand in the internet age.

Why is this important and how it can we use it to teach kids?

Now that may all seem like a trivial, even mindless, matter. And in many respect it is, but there is an important lesson to learn from this – about body image and helping children to differentiate between fantasy and reality.

The difficulties that young people have making sense of this picture-perfect world without negatively comparing themselves to it is so significant that we have dedicated two out of the eight lessons in our course on this topic and its impact.

@firstsite looks at the impact of sexual content online, and digs into the images we see all the time – in advertisements and increasingly on social media services. Kim Kardashian’s famous picture of her balancing a champagne glass on her butt actually appears as a key example of body image of the 2010s.

But tracking back through the decades – even going back to the 1800s – it becomes immediately clear that the “perfect body” is an arbitrary concept that changes over time. Why do we even think in terms of the perfect body?

At one point, we encourage teachers to hang up pictures of current advertisements and get students to identify what body parts the ad is focused on. By getting young people to critically assess the images they are constantly bombarded with, it gives them an awareness of issues around body image in the media, and from there, hopefully an awareness of, and extra confidence in their own bodies.

We have an entire lesson on media and celebrities with side-by-side examples of how celebrities’ images are touched-up and Photoshopped to look more fabulous than reality.

Increasingly, there are influential women that are pushing back against this picture-perfect approach. Actress Kiera Knightley famously told reporters “those things really aren’t mine” when she was shown an image of her significantly enhanced breasts on a movie poster. As she has grown more powerful as an actress, she had repeatedly vetoed similar efforts to boost her profile.

And singer Alicia Keys has become a de facto face for the #NoMakeup movement, refusing to spend hours trying to look immaculate and appearing on stage au naturel – something that resulted in a significant amount of online abuse.

One group – Global Democracy – even made a video that showed exactly how far from reality simple Photoshopping makes images. Go on – watch it – you know you want to.

Example slides from part 3 of our course showing how images are manipulated.

If you can get young people to think critically about this curated viewing experience that they have every day, often without realizing it, then it becomes possible to get them to ask the critical question: what is real beauty?

Just don’t expect Kim Kardashian to get there anytime soon. The same day as the unauthorized pictures of her on the beach appeared, magazines and newspapers – offline and online – were provided with a number of “personal Polaroids” of her and her sister in Mexico. In every one, they looked fabulous – and flawless.

» Analysis, News » What Kim Kardashian’s cellulite can...
On May 4, 2017
By Kieren McCarthy
Kardashian, media and celebrities

This site uses Akismet to reduce spam. Learn how your comment data is processed.

« It’s the taking part that counts Find out more »